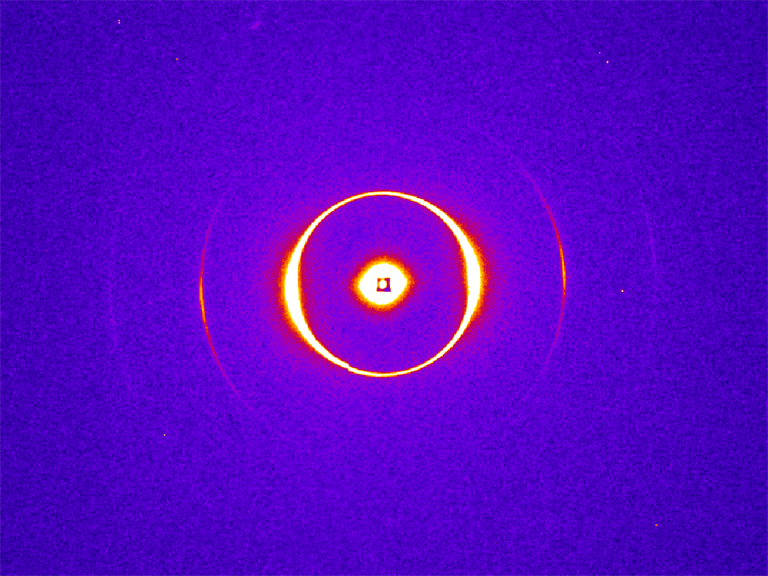 Epoxy is a thermoset polymer that is widely used in paints, composites and adhesives due to its very high strength; however, it is very brittle and can fail catastrophically. Therefore, there is a strong desire to create tougher epoxy materials.

One promising approach to increase the toughness is to incorporate rubbery nanomaterials into the epoxy. These soft, rubbery domains, in an otherwise hard and brittle material, can stop a crack from growing. Deborah Liu and Dr. Dan Krogstad at the Illinois Applied Research Institute have developed a nanostructured epoxy formulation that creates polymer domains at regular intervals throughout an entire material using block copolymers and ionic liquids.

In a recently published paper in the journal Macromolecules titled “Self-Assembly and Phase Transformation of Block Copolymer Nanostructures in Ionic Liquid-Cured Epoxy,” the research team showed that ionic liquids could be used to both cure the epoxy and direct block copolymers to form ordered nanostructures in the epoxy. “Block copolymers have been used previously to create nanostructures in epoxy, which improves the toughness of the materials. What is new here is that we can create highly regular nanostructures which can create a more consistent response over the entire material”, says Dr. Krogstad, the principal investigator on the study.

Block copolymers are materials made by chemically linking polymer blocks of different chemistry. Block copolymers have been studied for decades for their ability to self-assemble into well-ordered periodic structures. The key feature of this process is that it is spontaneous. Just as oil and water separate on their own, the two chemically different polymer blocks want to spontaneously separate. However, because they are chemically linked together, the polymers cannot completely separate, so they form these well-ordered structures to minimize the amount of contact between the two blocks. The feature size of these structures is generally tens of nanometers, and the size is tunable based on the composition of the polymer and the chemical environment.

In this study, one of the polymer blocks mixes well with the epoxy and ionic liquid, while the other block tries to separate from the rest and forms nanodomains. “One of the interesting aspects of this work is that by using an ionic liquid to cure the epoxy, instead of some of the more traditional molecules, we changed the nature of the epoxy formulation enough that we could induce the self-assembly of block copolymers,” says Dr. Krogstad.  This self-assembly process creates isolated nanodomains of polymer, which has the potential to increase material toughness.

This work is notable for its use of Pluronic® block copolymers, a block copolymer that is widely available and of substantial commercial interest. These new epoxy formulations are the first to show well-ordered nanostructures with such a cheap, commercially-available block copolymer.

The team plans to further study these formulations and to perform more mechanical testing on the formulations to prove that these structures can result in improved toughness without decreasing the strength of the materials.

This work was funded under a 2017 Air Force Office of Scientific Research Young Investigator Program award.